Creators of Cosmos S.M.P.C. has the honor and pleasure to announce the opening of the photo exhibition ‘Annabella’, with the aim of raising funds for the financial support of the legal fight of the family of Zacharias (Zak – Zakcie Oh) Costopoulos. Following relevant communication with the family of our deceased friend and fighter for the rights of the LOATKIA + population, we believe that this is the least we can do to contribute to the fight for justice. 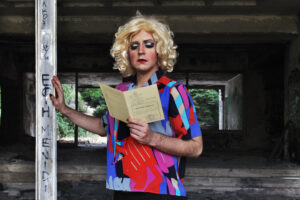 The central idea of the photographic depiction is to unite as many different lives as it can fit, to reconcile worlds and to bridge opposing views through an artistic dialogue. Annabella’s story concerns everyone. Men, women, heterosexuals, homosexuals, transgender, people who are not identified through gender identity (it does not matter at all) but remain trapped in a foreign reality, socially, sexually, psychologically. Annabella seeks and conquers the freedom to claim life away from the stereotypes imposed by each era. Social acceptance, fun, vocational rehabilitation, religion, love, family, loss. All experiences of a “normal” person who seeks a role and identity in the modern Greek and global social reality. The hero and central protagonist of the photographic work has an external appearance that in the era of “political correctness” could be characterized as gender fluid, with female and male characteristics that form an aesthetic amalgam. Annabella is ‘in a hurry’ to exist socially, but no one knows if she will be able to live the “dream”. As if she is always ready, she enters a war with daily battles where she will be beaten, cursed but in the end, she will be freed to live her own life.

The photo exhibition is the first collaboration of Creators of Cosmos with the photographer Loukia Damani – Lux, responsible for the original result, and the actor Spyros Georgakopoulos, who did an excellent job not only embodying Annabella but also delivering wonderful prose and ideas for the descriptive material accompanying the exhibition.

Our goal is to reach 300 copies in sales, all unique and with a certification number from the creators, so that we can provide the family with a respectable amount of financial support. We hope that with your support we will succeed. The exhibition will include two online discussions – meetings with the public, where creators and distinguished guests will exchange views on two different topics: “The identity of the individual-citizen in modern Greek society” and “Gender identity and Greek state. Prevention and treatment of stereotypes and prejudices”. 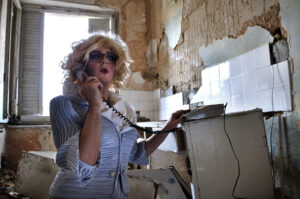 Before closing this press release, let us inform you about the history of the case and also thank the Kostopoulos family, who provided us with a small, and completely comprehensive, text in support of our effort. But also, the lawyer Klio Papantoleon for her unwavering support in the mediation and support of the project.

The background of the case

On September 21st, 2018, Zak Kostopoulos, an activist of the LOATKIA+ population, was brutally lynched in the Athens city center by two citizens, in public view. The perpetrators, who attacked him with unprecedented ferocity and with repeated, persistent and coordinated blows all over his body and especially on his head, resulted, horribly, to his death. The intervention of the police forces, not only did not result in the protection of the victim’s life, but with their violent behavior during his arrest and the beatings they inflicted on the victim, they also contributed to the occurrence of his death. Despite attempts by the perpetrators to cover up and the unprecedented attempt to misinform and incriminate the victim, which initially took place in the media, the videos released from the incident and the huge wave of social solidarity resulted in the prosecution of the victims. Two citizens and four of the police officers who carried out the violent arrest. The six defendants have been referred to trial for the crime of fatal bodily harm and will be tried on October 20th, 2021 before the Mixed Jury Court of Athens.

The letter of support from the Kostopoulos family

We would like to welcome the organization of the online photo exhibition “Annabella” designed by your company and to thank you personally as well as everyone who participates in this project. The issues of gender identity and hate speech are issues that our son and brother was particularly concerned and involved, both through his work and his active presence in the public sphere and in collective processes. We would also like to thank you from the bottom of our hearts for your intention to contribute financially to our legal fight to condemn those who so brutally took his life. We are at your disposal to contribute from our side to this effort that honors the memory of our beloved Zak.

Subscribe to our newsletter and keep up with our news, using the form you will find on the contact page.